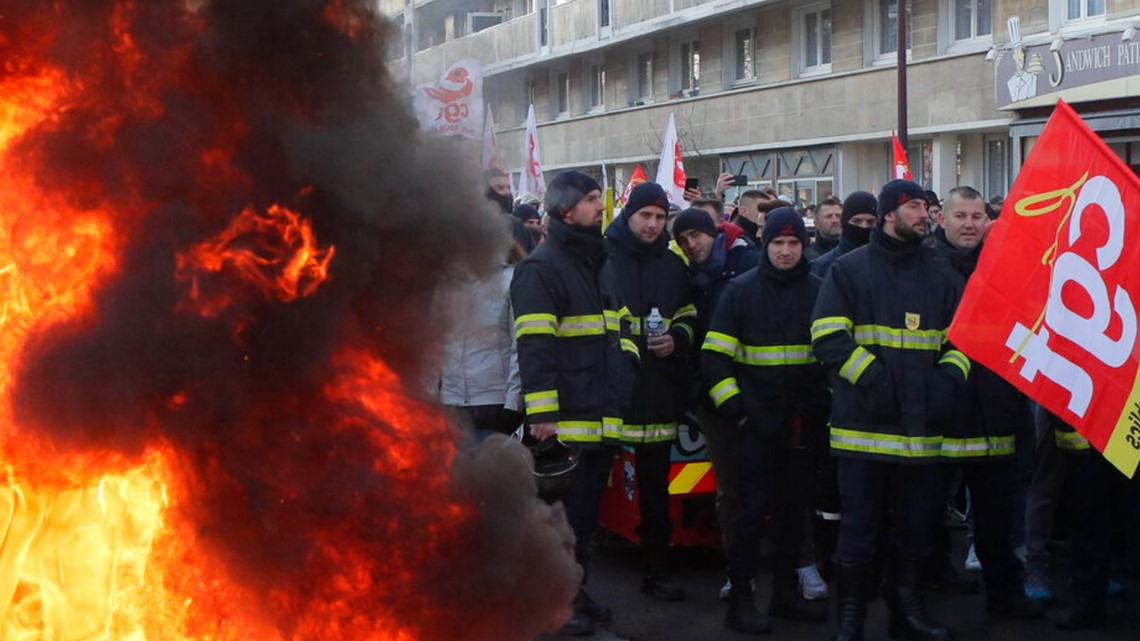 French unions have announced more strikes and protests as they push back on government plans to push up the standard retirement age from 62 to 64.

PARIS, France — At least 1.1 million people protested on the streets of Paris and other French cities Thursday amid nationwide strikes against plans to raise the retirement age — but President Emmanuel Macron insisted he would press ahead with the proposed pension reforms.

Emboldened by the mass show of resistance, French unions announced new strikes and protests Jan. 31, vowing to try to get the government to back down on plans to push up the standard retirement age from 62 to 64. Macron says the measure – a central pillar of his second term — is needed to keep the pension system financially viable, but unions say it threatens hard-fought worker rights.

Out of the country for a French-Spanish summit in Barcelona, Macron acknowledged the public discontent but said that “we must do that reform” to “save” French pensions.

“We will do it with respect, in a spirit of dialogue but also determination and responsibility,” he added.

As Macron spoke, riot police pushed back against some protesters throwing projectiles on the sidelines of the largely peaceful Paris march. Some other minor incidents briefly flared up, leading officers to use tear gas.

Paris police said that 38 people were detained as a mass of people thronged the streets of the capital despite freezing rain, the crowd so big that it took hours to reach their destination. Retirees and college students joined the diverse crowd, united in their fear and anger over the reform.

In a country with an aging population and growing life expectancy where everyone receives a state pension, Macron’s government says the reform is the only way to keep the system solvent.

Unions propose a tax on the wealthy or more payroll contributions from employers to finance the pension system instead.

Polls suggest most French people oppose the reform, and Thursday was the first public reaction to Macron’s plan. Strikes severely disrupted transport, schools and other public services, and more than 200 rallies were staged around France.

Big crowds also turned out for protests against previous efforts at retirement reform, notably during Macron’s first term and under former President Nicolas Sarkozy in 2010. But none of those drew more than 1 million people according to government estimates.

Jean Paul Cachina, 56, a worker in human resources, joined the march in the French capital — a first ever for him.

“I am not here for myself,” he said. “I am here to defend the youth and workers doing demanding jobs. I work in the construction industry sector and I’m a first-hand witness of the suffering of employees.”

Many young people were among the Paris crowd, including high school students.

Nathan Arsac, 19, a student and member of the UNEF union, said: “I’m afraid of what’s going to happen next. Losing our social achievements could happen so fast. I’m scared of the future when I’ll be older and have to retire.”

Sylvie Béchard, a 59-year-old nurse, said that she joined the march because “we, health care workers, are physically exhausted.”

“The only thing we have is to demonstrate, and to block the economy of the country,” she added.

The economic cost of Thursday’s strikes wasn’t immediately clear, but protracted walkouts could hobble the economy just as France is struggling against inflation and trying to boost growth.

Police unions opposed to the retirement reform also took part in the protests, while those on duty sought to contain scattered unrest.

Most train services around France were halted, including some international connections, and about 20% of flights out of Paris’ Orly Airport were canceled.

The Education Ministry said more than a third of teachers were on strike, and national electricity company EDF announced that power supplies were substantially reduced Thursday amid the strikes.

The Versailles Palace was closed Thursday while the Eiffel Tower warned about potential disruptions and the Louvre Museum closed some exhibition rooms.

Philippe Martinez, secretary general of the hard-left CGT union, urged Macron to “listen to the street.”

Laurent Berger, head of the more moderate CFDT union, called the reform “unfair” and said Thursday’s show of resistance was a warning sign.

Many French workers expressed mixed feelings about the government’s plan and pointed to the complexity of the pension system.

Quentin Coelho, 27, a Red Cross employee, felt he had to work Thursday despite understanding “most of the strikers’ demands.” Coelho said he fears that the government will keep raising the retirement age, so is already saving money for his pension.

Others worry the reform will hit harder for low-income workers, who live less long than the wealthy.

“It’s a social issue. Do you want to retire sick, broken and even some dead? Or do you want to enjoy life?” asked Fabien Villedieu, a 45-year-old railway worker,

French Labor Minister Olivier Dussopt acknowledged “concerns” prompted by the pension plans but said the government rejected other options involving raising taxes — which he said would hurt the economy and cost jobs — or reducing pensions.

The French government is formally presenting the pension bill on Monday and it will head to Parliament next month. Its success will depend in part on the scale and duration of the strikes and protests.

Most opposition parties, including the left and the far-right, are strongly against the plan. Macron’s centrist alliance lost its parliamentary majority last year, yet still has the biggest group at the National Assembly, where it hopes to ally with the conservative The Republicans party to approve the pension reforms.

Under the planned changes, workers must have worked for at least 43 years to be entitled to a full pension. For those who do not fulfil that condition, like many women who interrupted their career to raise children or those who studied for a long time and started working late, the retirement age would remain unchanged at 67.

Those who started to work under the age of 20 and workers with major health issues would be allowed early retirement.

Protracted strikes met Macron’s last effort to raise the retirement age in 2019. He eventually withdrew it after the COVID-19 pandemic hit.

Retirement rules vary widely from country to country, making direct comparisons difficult. The official retirement age in the U.S. is now 67, and countries across Europe have been raising pension ages as populations grow older and fertility rates drop.

But opponents of Macron’s reform note that, under the French system, people are already required to work more years overall than in some neighboring countries to receive a full pension. The plan is also seen by many as endangering the welfare state that’s central to French society.