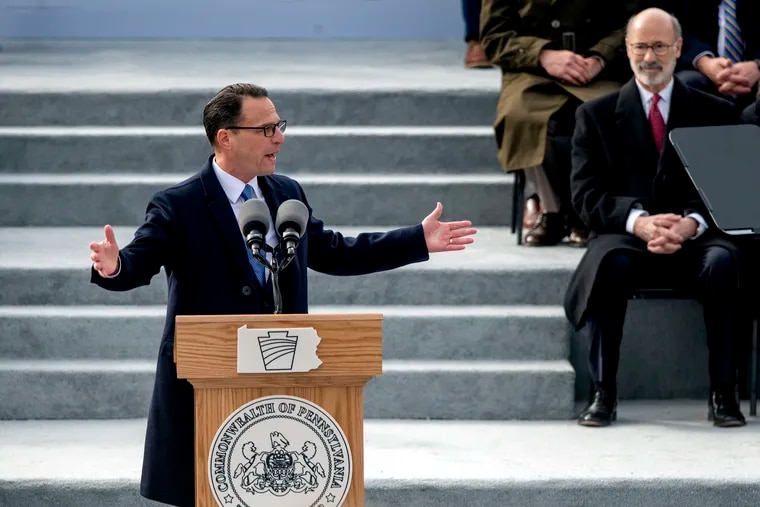 Pennsylvania Gov. Josh Shapiro wants to cut back on state pension funds’ reliance on outside investment contractors, who manage billions of dollars in public money while collecting lucrative state fees.

“We need to get rid of these risky investments. We need to move away from relying on Wall Street money managers,” Shapiro said Tuesday at a news conference, making some of his first remarks on the subject since he was elected.

The Public School Employees’ Retirement System (PSERS) said in a recent report that it had paid private managers $1.7 billion in 2021, with the agreement that the managers who delivered the most profits to the state could keep a share of those earnings alongside their annual fees.

The formulas by which those fees are calculated are often secret, with paragraphs blocked out or pages excluded from publicly available contracts. Sen. Katie Muth (D., Montgomery), a PSERS trustee, has sued to make the full contracts public, so far without success.

What worked in Montco

As chairman of the Montgomery County commissioners, Shapiro in 2013 persuaded colleagues to fire dozens of traditional pension managers and replace them with low-cost index funds.

Governors don’t directly control pension investments. They do appoint some members of the pension boards, who are charged with managing funds to members’ advantage.

Investment profits alone are not enough to finance future payments from the underfunded plans because of past investment returns, a high number of retirees compared with active workers, and the state’s failure to fully fund pensions in the 2000s.

State and school district taxpayers contribute more than $8 billion a year to keep the plans healthy, with help from smaller employee contributions from future pensioners. The state also has more than 1,000 independently managed, locally funded county, public authority, municipal, police, firefighter, and other pension plans — more than in any other state.

Shapiro told reporters Tuesday that he hopes to do for Pennsylvania what he did for Montgomery County when he headed county government in the early 2010s: “Fire the money managers, saving millions of dollars that’s going to their high fees.”

He blamed the private managers for “costing the county millions and, frankly, leaving us with far worse returns than simply investing in a passive system like Vanguard” Group, the Malvern company that pioneered low-fee stock-index funds that rise and fall with broad market indexes such as the S&P 500.

He said he’s convinced that the state can both reduce the risks to its investments and “get a much higher return” by scrapping many of its private managers, whether the money is reinvested with Vanguard or other options he hasn’t yet presented. Shapiro gave few details, promising only that he will “have a lot more to say about the reform that I want to see at PSERS and SERS” in the future.

Since the market collapse of 2008-09, PSERS and SERS each have terminated a series of stock-picking firms that formerly managed leading shares of their public assets. They now manage billions through civil servants who oversee indexlike portfolios, as well as some more complex trading strategies.

But the pension plans still rely more heavily than most U.S. state funds on private equity, private real estate, and private debt managers, whose fees are typically higher than old-fashioned stock-picking firms — and whose returns can take years to materialize.

PSERS trustees voted in 2021 to eliminate another category of private managers by selling off more than $5 billion in hedge-fund investments over the next few years, citing disappointing hedge-fund returns since the system bought into those strategies even as it was missing out on the bull market for U.S. stocks — though hedge funds performed well when the stock markets fell last year.

It is the private investment managers who now stand to lose state business if Shapiro is able to persuade the pension boards to change their ways.

In 2013, Montgomery County dumped dozens of private money managers — including Pennsylvania firms headed by industry veterans such as Ira Lubert, Jim Nevels, and Richard Ireland — and sent most of the cash to Vanguard, plus a slice to another automated manager, SEI Investments. Funds founded by Lubert are among the biggest holdings of both state funds at present; managers have said they performed well over time.

Shapiro has important leverage at the state pension system, SERS, because he appoints six of its 11 trustees. The others are elected officials, some from the governor’s party.

Governors have less influence at the larger PSERS pension system, where costs are split between the state and local school districts. The governor appoints just three of the 15 trustees. That board is typically dominated by suburban and upstate PSEA teachers’ union local leaders, who hold five seats, and their allies, including legislators who receive teachers’ union political contributions.

The union members have mostly favored the old strategy of private investments, even when challenged by governors’ reps and the last couple of state treasurers. Limits on the union’s power were made clear last week when public officials from both parties balked at naming another teachers’ union leader as vice chairman and likely successor to the current board chairman, Lower Merion teacher Chris Santa Maria, at least until vacant trustee seats are filled. Santa Maria, who plans to retire from teaching in June, says he can remain on the PSERS board through the end of the year.